This hike will go down as one of the most insane I’ve done to date. Nothing went horrifically wrong, but nothing went quite right either. The two peaks I needed to tag were Pierce and Jackson. I was with a friend who needed to hit Monroe, so we decided to do a point-to-point hike, taking Ammonoosuc Ravine Trail to Crawford Path, which summits Monroe, Eisenhower, and Pierce, then take Webster Cliff Trail to the Jackson summit and follow is down the cliffs to Rt 302. It was a solid plan, albeit ambitious. We also should have started by 8am, not 10am, but we were waylaid by the bounty of wild raspberries growing on the side road leading to the trailhead and a stranded family who tried to convince us to drive them back to the AMC Highland Center. Luckily, we declined. If we hadn’t, we would have been hiking well into the night.

Ammonoosuc Ravine Trail starts at a parking lot on the Cog Railway Base Road. Marshfield Station is at the end of this road, where the historic cog train begins its journey to the Mt. Washington summit observatory. There is also a Cog Railway Museum (free admission), a gift shop, and a convenience store. The station and the train operate year round.

The trail follows the Ammonoosuc River all the way to the AMC Lakes of the Clouds Hut. It is the most direct route to the shelter and the safest in poor weather because it is mostly in woods or scrub. Easy grades and some rough footing make up the first three miles of this hike, until crossing Monroe Brook. The trail skirts to the right to avoid an area severely damaged by an avalanche in 2010. The track of the slide is visible to the left.

Less than a half mile further along, the trail crosses the outlet of Gem Pool. This emerald pool at the foot of a cascade is like something out of a fairy tale. If you need a rest, this is the spot to stop. Mostly because it’s beautiful, but also because this trail is about to get serious.

After the pool the trail climbs steeply over rough rock steps for the next mile, continuing to follow a brook. There are multiple side trails that lead to views, and I recommend taking every single one. At one point, the main brook falls about 600 feet down a gorge in the mountainside at an average angle of 45 degrees (according to the AMC guide). It is a truly spectacular sight and difficult to capture the scale of it with a camera.

The cascades continue as the trail ascends over flat ledges. Some of these rocks are perpetually wet, so use caution. When the trail reaches the head of the highest waterfall, turn around and look out at the view. The brook drops off and gives the impression of a wilderness infinity pool. After this last waterfall the grade becomes more moderate, but the footing is almost entirely ledge. Trees give way to scrub and the last leg of the trail follows cairns up and over rock slabs until reaching the intersection of Crawford Path at Lakes of the Clouds Hut.

We reached the hut around noon, making a quick stop for lunch. By this time, clouds were settling over the top of Mt. Washington.

We made quick work of Mt. Monroe, which is essentially climbing up a pile of rocks to reach the summit. If Monroe isn’t on your list, skip Mt. Monroe Loop and stay on Crawford Path, skirting around to the east of the peak. The AMC White Mountain Guide notes that the alpine plants around Mt. Monroe are ‘probably the most significant tract of rare vegetation in the entire White Mountain region.’ With that in mind, stay on the marked path at all times.

From Mt. Monroe to Mt. Eisenhower, Crawford Path crosses the shoulder of Mt. Franklin over ledges and continues with moderate ups and downs through alpine scrub. Crawford Path is well defined, with stone borders to remind hikers not to wander off and trample the fragile plant life. In some places the footing is rough and rocky, but the trail is easy to follow and offers fantastic views in every direction.

Taking the Mt Eisenhower Loop Trail to the Eisenhower summit will add .3 miles and 300 feet of elevation. We skipped this and passed Red Pond, an alpine tarn with little water. It was around  this point that we heard someone yelling. It was a distressed sound, like a person yelling “Hey!” My hiking partner responded, but it wasn’t clear where the yeller was or if he needed help. We continued on, and a few minutes later we heard the yelling again, this time behind us.

We turned around and saw a man standing on Crawford Path looking utterly lost. He didn’t have a backpack and was wearing shorts and a t-shirt. The temperature was dropping quickly, rain was inevitable, and he was entirely unprepared. He had lost his group and tried to explain in broken English where he was supposed to meet them (at a ‘place where you sleep and eat.’) His phone didn’t have service (ours didn’t either) and he didn’t know which direction he was supposed to be traveling. We guessed he was headed to an AMC hut, either Lakes of the Clouds or Mizpah Spring, which were in opposite directions. Lakes was closer, so we suggested he go that way.

This interaction was undeniably disturbing. This is how people die in the Whites. The man was lost, unprepared, struggling with the language, and unfamiliar with his surroundings. And there was a storm coming.

At the very least, we felt confident he would make it to the hut before dark.

We continued along Crawford Path, summiting Mt. Pierce before descending to the AMC Mizpah Spring Hut. We stopped there for water and to take a break. At the front desk, an AMC volunteer was radioing over the Lakes of the Clouds hut to locate the missing man. The rest of his hiking party was at Mizpah, and they were being strongly advised to stay put and reconnect with their friend in the morning.

For a moment, we considered staying the night too. It was almost 5pm and the rain had started. We still had six miles to hike, a 4000 footer to climb, and a cliff to descend. And then we had to get back to a car drop on Base Road.

Hiker term: Car drop
Hiking lingo for leaving one car at each end of a point-to-point hike. Drop car #1, everyone pile into car #2, park car #2 at trailhead, hike to car #1, drive back to car #2.

Unlike our lost friend, we were prepared for the weather. We had rain gear, headlamps, plenty of food and water, and emergency supplies in case we did have to camp in the woods. Considering those failsafes and the hours of daylight we still had, we kept going.

From Mizpah, we took Webster Cliff Trail south through the open alpine meadows and up the steep, ledgy cone of Mt. Jackson. After coming down from the summit, the trail follows the ridge up and down a few scrambles and across several wet gullies before reaching Mt. Webster (3910 ft). We reached Mt. Webster at 6:30pm. It was misting out, enough to soak everything. Stopping movement meant getting cold. From the rock pile marking Mt. Webster’s summit, we could see down to Rt. 302, our final destination. It seemed impossibly far away.

As we were mentally preparing for the final push, an AT hiker appeared from the woods and climbed up the steep southern slope of Mt. Webster. She looked nothing short of miserable. We asked her, “How is this trail?” She replied, “It f&cking sucks.”

I took my last picture (the one of 302), stowed my phone, took a deep breath, and started down.

And it did f&cking suck.

It was insanely steep, slippery, ledgy, rough, and scrambly. My hiking buddy wiped out and jackknifed a hiking pole. I managed to stay upright, but my knees were screaming. The final three miles of descent never let up. After making it past the cliffs, the trail continued its steep descent through the woods. Because of the tree cover and the cloudy sky, it was dusky and difficult to see, but no one wanted to stop for headlamps. With the ledges behind us, we fell into a silent, rapid pace. The only goal was not to fall and to get out of the woods before total darkness. The aggressive pitch continued until the last quarter-mile, and I don’t think I’ve ever been more excited to see my car at the end of a hike.

After recovering from this physically draining and mentally harrowing adventure, I’m able to objectively say that on a beautiful day, if I weren’t exhausted and wholly focused on not dying, this could have been an enjoyable—albeit challenging—trail. There are multiple outlooks on the ledges and on Webster Cliffs with incredible views of Mt. Washington and the surrounding ranges. According to the AllTrails review, Webster Cliff Trail is primarily used for ‘hiking and snowshoeing’. I’m intrigued by the snowshoeing, which seems like it could be incredibly challenging but also very rewarding at the top.

Have you snowshoed Webster Cliff? Lemme know! This is a trail I’d like to try again, just to prove I can do it with fewer dramatic twists.

Recap: This car-drop hike is a doozy. Ammonoosuc Ravine Trail is by far one of the most beautiful trails I’ve been on in the Whites. It is also rough and challenging, but the payoff outweighs the pain. Crawford Path from Lakes of the Clouds Hut to Mizpah Spring Hut is what you would expect of a fully exposed alpine trail. Rough footing, amazing views, scrambling up summits, well-defined borders to keep hikers off the fragile vegetation, and potentially hazardous weather conditions. Webster Cliff Trail is incredibly challenging to descend. Steep, ledgy, and unrelenting, this 4.4 mile section of trail (8.8 round trip) would be a strenuous hike all on its own. Strung together, these three trails, four 4000 footers, two AMC huts, and 13.2 miles of terrain made for one of the toughest hikes I’ve done to date. 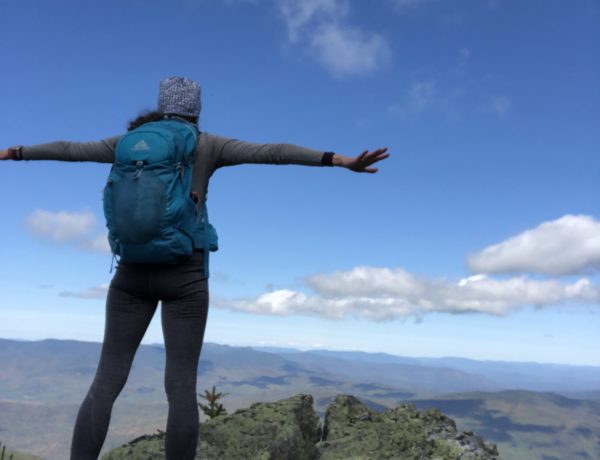