I headed out to Mt. Moriah with some trepidation. My last hike up East Osceola had produced a full-on, grown-woman temper tantrum on the trail complete with yelling, swearing, and throwing of trekking poles. The postholing had been hellish and I couldn’t find a way around the rock chimney for Luna (hence the temper tantrum). I tagged East Osceola but not Mt. Osceola, which meant I had to go back for it (epicly annoying when you’re on a schedule). I was tempted to wait for the snow to melt before hiking again but determined 1. I didn’t have the time for that if I was going to make my goal, and 2. Taking a break because the conditions were hard (not unsafe, just unpleasant) felt a titch too close to quitting.

So, when Jill asked if I wanted to hike on a Friday in early April, I said yes. I suggested Mt. Moriah because it’s one the peaks that’s sort of off on its own. You could combine it with the Carters, but that would be a really long hike. I also saw that dogs are allowed, and Jill and I were looking for something the pups could do with us. Jill’s dog, Romy, is a nine-month-old black lab mix, so we needed a trail without a ton of challenging scrambles (like the aforementioned rock chimney). There were no red flags in the AllTrails comments sections or in the AMC White Mountain Guide, so off we went.

The north end of the Carter Moriah trail begins at Bangor Street, which is a dead end side street with a bunch of houses. You kind of feel like you’re parking in someone’s yard. Also, whichever hiker got there first made the inconsiderate choice to parallel park, when clearly the parking was meant to be nose-in to optimize the limited space. Jill and I were there on an off-season weekday, but I imagine the parking fills up fast on weekends. If you plan this hike during a busy time, arrive early and set the tone by parking in a space-saving manner. I learned in the AMC guide that parking is also available at the power-line clearing 0.1 mile back on the east side of Bangor Street, and also at the Libby Recreation Area in Gorham.

The parking lot was also our first encounter with Man-Who-Hates-Dogs (I know, WHAT!?) Luna, having been cooped up in the car for two hours, went bee-bopping over to say hello to a guy who was getting his pack ready. He shooed her away (fine) but I could tell by his tone he didn’t have an abundance of patience for her enthusiasm. Luna went off to see another man, who also ignored her and shook his head at me in annoyance from across the parking lot.

I was somewhat stunned by not one but TWO unfriendly encounters. Whether you like dogs or not, they kind of come with the hiking territory. Jill pulled up a minute later and I warned her about the dog-haters. I was so flustered by the whole situation that I left Luna’s leash (which I fully intended to bring with me, just in case of another Man-Who-Hates-Dogs run-in) in the car.

For the record, this trail does NOT require dogs to be on leash. Should I have leashed her in the parking lot? Yes, because although Luna generally responds well to voice command, the puppy in her still gets very excited to meet new people and sometimes she forgets her manners. I take responsibility for that. But hiking off-leash is not against any rules on this trail.

We headed up the Carter-Moriah Trail, which started as a pretty easy woods walk leading up through second-growth woods (aka woodlands regrowing after a timber harvest). There were a lot of trees down, others cut, some struggling to grow. It reminded me of a gawky adolescent phase, in forest form. Jill and I both commented several times on how odd it looked. Somewhere in this stretch of teenage trees, we took an off-trail pit stop (I was well hydrated with coffee). During this time, Man-Who-Hates-Dogs and his partner appeared below us on the trail. Luna being Luna, she went off to greet them. I heard him say something along the lines of “Get out of here!”

I think it’s safe to say ‘Get out of here’ is a command known to no dog. Also… really?

I called Luna back and Jill and I hustled the dogs along to put some space between us.

After about a mile, the trees transitioned into more mature hardwood and spruce forests, and around mile two, we came to a ledge with a fantastic view of the snow-capped Presidential Range. Shortly after this outlook, we passed the summit of Mt. Surprise (Surprise! You probably won’t notice it!) and paused to put on MICROspikes because we were encountering snow. I was mentally prepared for the worst, having spent my previous two hikes up East Osceola and the Tripyramids postholing and swearing in equal quantity. Mercifully, the Mt. Moriah monorail was solid, and the postholing wasn’t an issue. The trail rolled up and down for a bit before starting a steep ascent over ledges. On the way down, as the temps warmed and the snow started melting, these rocks were pretty slick. Careful stepping and some tree-grabbing were required.

After several pause-worthy views from the ridge top, we reentered the woods and passed an enormous boulder. The AMC White Mountain Guide informed me this rock is called Quimby’s Pillow after E.T. Quimby, a Dartmouth professor who led a survey party up the mountain. After the boulder, the trail traveled over several wooded bumps before the last steep climb to the top, where there is a rock summit large enough to lunch on. As we approached, we saw a man eating lunch on the boulder. He called (in a calm, polite tone), “Any chance you have leashes for your dogs?”

I realized this was the man in the parking lot who shook his head at me when Luna trotted over to see him.

“We do!” Jill said… which was half true, since I had left Luna’s leash in the car in my state of flustered-ness.

We jerry rigged Jill’s leash to contain both dogs and made our way up the boulder.

“Thanks so much,” the hiker said. “I just get really nervous around strange dogs.”

He went on to chat pleasantly with us about the view (which was STUNNING) and the hike, packed up his things, and headed down.

Jill and I settled onto the rock to have a snack and take pictures. Romy was very agreeable to posing for the blog; Luna was very busy sniffing the rock. As we were getting ready to head back down, we heard hikers approaching from the trail. I knew it was probably Man-Who-Hates-Dogs and his hiking buddy. Sure enough, Luna went bounding off (barking, to let us know new friends were arriving) and greeted them with her classic enthusiasm, including panting smiles and tail-wagging. To be fair, I couldn’t see the encounter, so I’m not sure if she jumped up or not. All I heard was him saying, “Get out of here, Jesus Christ!”

So, again, should I have leashed Luna before she could run up to him? Yes, because like the parking lot incident, her excitement got the better of her. I’m accustomed to most people embracing in her overt friendliness, but I should not assume all humans enjoy being greeted by happy, wiggling, seemingly out-of-control dogs.

Jill and Romy had already scooted past the hikers, and I called from the summit, “We’re leaving.” To which Man-Who-Hates-Dogs replied, “Good.”

I walked past him and his silent (and possibly mortified by his rudeness?) partner without a word and caught up with Jill, who said with a laugh, “Seriously? She’s a golden retriever.”

To be fair, I realize if you are someone who fears dogs it doesn’t matter if you’re facing a fluffy golden or a menacing doberman, they’re all scary. The first man we encountered clearly had a real fear and was firm-but-polite when he asked us to leash our dogs. We, in turn, were happy to oblige. Man-Who-Hates-Dogs, on the other hand, was about as unpleasant as a human could be in this kind of situation.

I allowed myself to be thoroughly irritated by the encounter for about three minutes. I could have obsessed about it for the entire descent. I could have replayed the scene and thought about what snarky comment I could have made in retort, or if I was at fault for not calling Luna back sooner, or whether my dog is actually a terror disguised by fluff. These are thoughts that easily could have monopolized my day and adversely affected my hiking experience. I caught the rumination starting to roll and stopped it in its tracks. No way was I going to let this man ruin my day. I gave myself three minutes to think about what happened and then… I let it go.

When I got home, I did some research about the generally accepted rules of hiking with dogs. There is a very informative post on the AMC blog that covers topics ranging from etiquette to safety. In the future, I’ll be more vocal about asking fellow hikers who cross our path if they’d like me to leash Luna (most won’t, I’m guessing).

The positive takeaway here is to remember everyone enjoys the outdoors in different ways, and being respectful of that is always the right move. The other reminder—which was less pleasant to experience but still valuable—is that I can’t control the reactions of others, nor should I try.

Part of learning to advocate for what you need is accepting that not everyone is going to get it. That can feel really uncomfortable, especially if you’re used to contorting yourself into a pleasant pretzel to make the people around you feel good. Living with—instead of trying to change, fix, or even validate—the feelings of others is a skill worth building, and definitely one I had to utilize during this hike.

As Jill pointed out when we were discussing the man’s reaction later, “It must be hard to be so angry all the time.”

Must be. But that’s on him. I, for one, had a wonderful day.

Recap: This hike started off easily and gradually got harder. Some very steep stretches are made more difficult by ledge underfoot, which is treacherous when wet. There are ways to travel around the rock and find surer footing on the softer trail edges, but it does take longer to do this. The summit is a stunner. It is definitely one of the best I’ve found outside the small group of peaks closer to 5000 feet. 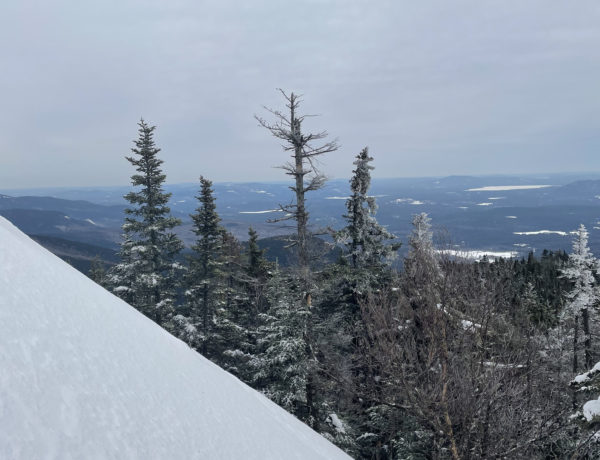 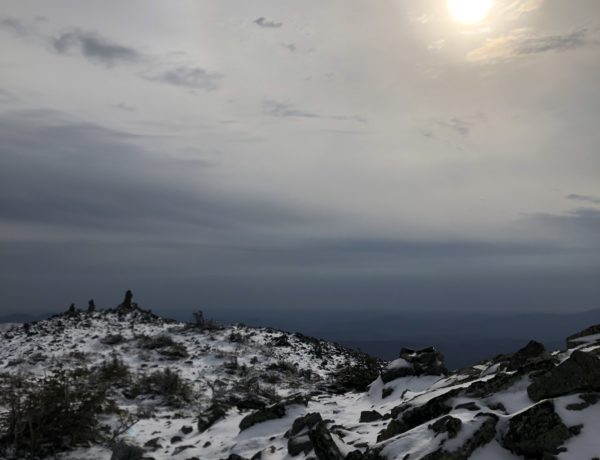 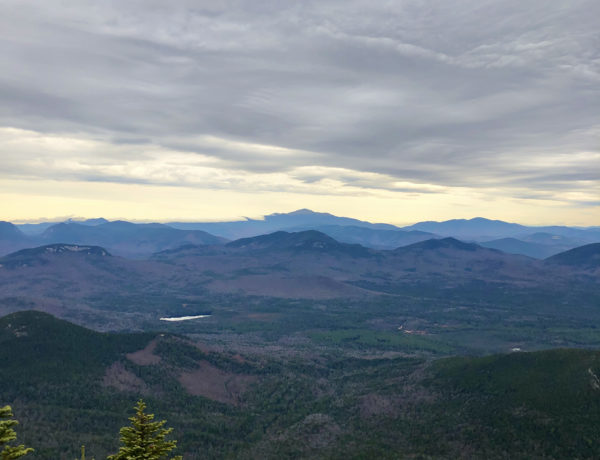