Mount Chocorua via the Piper Trail is possibly one of the most popular non-4000-footer hikes in the Whites. The trail is well maintained and scenic, there is a shelter along the way, and the summit offers stunning views and a legit scramble to the top. It is not unusual for the parking lot to be full in the summer. According to the AMC White Mountain Guide, the lot is not plowed in the winter. Although I was there early in the winter season (Dec 22), there was already a few inches of snow, and half the lot was plowed out. So, maybe the plowing depends on the whim of the driver on any given day. On this day, I was able to drive in easily, and the pit toilets were unlocked too.

The first section of Piper Trail ascends moderately through the woods and stays close to the Chocorua River before crossing it via a bridge just shy of the two mile mark. After the river, the trail begins to climb through evergreens, switchbacking up a relatively steep slope. In the summer, the ascent is aided by many stone steps. In the winter months, snow covers the ground and snowshoes are a big help.

A spur path at 2.8 miles leads to an open shelter with a tentsite, a water source, and a view. If you skip the shelter, the trail makes a sharp right turn and climbs more steps before reaching the first of many open ledges with amazing views. The curved point of Chocorua’s summit is visible, as is the wooded ridge leading up to it. There are several more pause-worthy viewpoints before the trail reenters the woods and climbs toward the crest.

At 3.8 miles, just before the trail comes out of the woods onto the exposed section of the ridge, the West Side Trail veers off to the right. A sign marks this as the ‘bad weather route.’ This trail is about the same distance as crossing the Chocorua summit, but it avoids all exposure by keeping you in the woods. On this day, it was cold, snowy, and windy, and I chose the bypass.

In retrospect, it may have been easier to go over the summit and simply skip the scramble to the top (there is a short bypass at the base of the final rocky knob that allows this option).

When I started on the West Side Trail it appeared to be broken. And it was. By a moose.

But the moose opted to make a hard right, heading straight down the west side of the mountain, as moose do when they feel so inclined. The moose’s exit meant I was wading through deep, fluffy snow. Even with snowshoes, I was sinking 6-10 inches. I was also fighting my way through long-hanging, snow-laden evergreen branches and getting covered with snow. Luckily the elevation of the bypass is pretty flat, until the very end when it makes a short, steep climb back up to the junction of Liberty Trail.

Liberty Trail descends from the summit of Chocorua and hugs the south side of the peak. After one steep drop near the top (it was covered with snow and I still tumbled down it, so use extra caution if it’s exposed and wet or icy), the trail is moderate as it travels the wooded ridge. The Jim Liberty Cabin appears on the east side of the trail, with massive chains anchoring it to the mountain. A sign above the door regales a storied past:

This cabin is located on the site of the Peak House, a three-story hotel built by David Knowles of Silver Lake, NH in 1891 on land formerly owned by Jim Liberty, builder of the original stone foundation and the trail bearing his name. Built with material hauled to the site by horse and wagon, the Peak House Hotel provided food and lodging and was a popular destination for hikers and tourists. Though anchored to the rock by iron cables it was destroyed by a storm in 1915. This cabin was built in 1932, and renovated in 1974 by the WMNF. Please treat it with care.

I peeked inside the cabin and found three three-level bunks and a table with a bench. There is plenty of floor space for additional beds. Unfortunately, there is a chimney but no stove. The cabin is located in a ‘kindle no fires’ area of the WMNF, so although it would be a welcome shelter from the elements, it’s not very cozy.

After the cabin, Liberty Trail passes an outlook and dips into a sag just before making a hard right to the south while Hammond Trail continues straight. There are several viewpoints on Hammond, as well as ledgy areas, another sag, and spruce woods before Weetamoo Trail veers off to the left. While Hammond was well-packed, Weetamoo didn’t have a single step on it. I broke trail for 2 miles before reaching the intersection with Piper Trail. Although the breaking was work, Weetamoo is a beautiful stretch of trail. All the grades were moderate, and the landscape was a nice variety of spruce, young hardwood, and ledge views. Weetamoo Trail also passes Weetamoo Rock, a massive boulder on the downhill side of the path.

Weetamoo Trail travels along the Chocorua River before crossing it and rejoining Piper Trail. Other than some icy rocks, the crossing was easy enough at this time of year, but I imagine it gets harder in the spring.

Recap: There are several trail options to reach the summit of Mt. Chocorua, ranging from moderately challenging to difficult. Piper Trail is a 8.5 mile option that brings you straight up and back down. Opting to make it a loop doesn’t add mileage, but it does add some really nice extra views, and you get to see the other side of the mountain. During the winter, be aware you may encounter trails on the loop that haven’t been broken, so plan ahead! The Jim Liberty Cabin on Liberty Trail is a nice spot to rest and imagine what it would have been like to visit in 1892, when it was a two-story lodge. 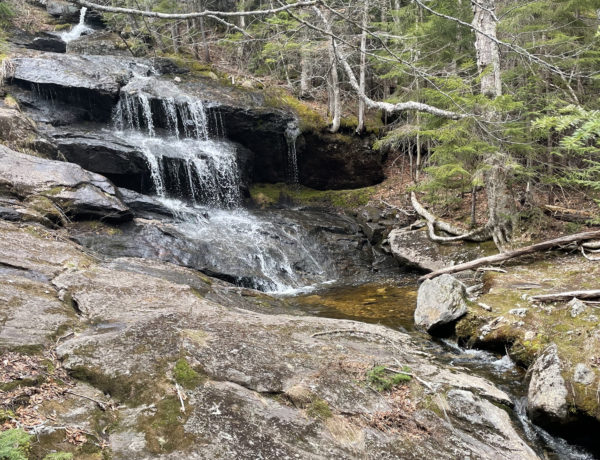 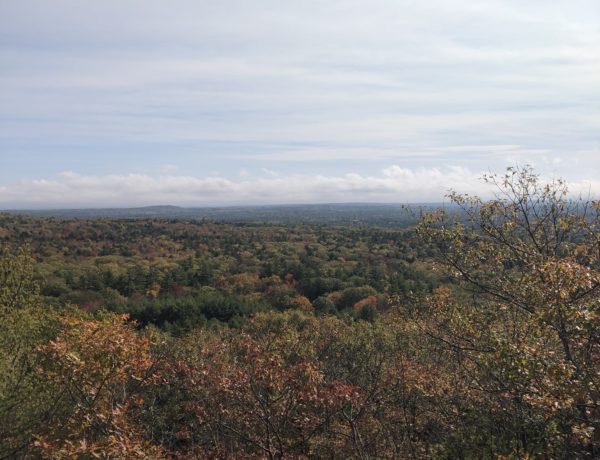