I spent the five days between returning from hiking Mt. Mansfield in Vermont to complete the VT5 and leaving for the 100 Mile Wilderness cataloging gear, making final purchases and last minute packing changes, and eating a lot of bonus calories. My planning for the trip (actual planning, not just daydream planning) had started months earlier with a call to Wendy Weiger, the Monson A.T. Visitor Center Manager. The center is run by the Appalachian Trail Conservancy, and a big part of Wendy’s job is helping thru hikers navigate the rules and regulations associated with hiking into Baxter State Park.

And let me just tell ya, there are some rules.

The biggies: No camping in undesignated spots. No dogs. No boisterous celebrations.

Here’s why this is a challenge for thru hikers who have been on the trail for over 2000 miles and generally at least four months… they’ve been camping pretty much wherever they felt like stopping for the day. They have dogs with them and no plans to leave them outside the park. Katahdin is THE celebration they’ve been waiting for.

The rules of Baxter feel a bit incongruous with the vibe of the AT. It also causes stress for hikers who obviously don’t know when they start in Georgia exactly when they’ll be summiting Katahdin. That makes it nearly impossible to make camping reservations and leaves them totally at the mercy of The Birches, the Baxter campground reserved for thru hikers only, which has a meager capacity of 10. Even for those of us who know exactly (or within days of) when we’re arriving, getting a camping spot in Baxter State Park during the summer is a challenge.

And that is exactly why there are so many rules. Baxter, and the AT in general, have become even more popular in recent years. The pandemic spurred interest in the outdoors and gave people who had not previously had flexibility the opportunity to take more time off. Wendy explained that the occurrences of rogue camping and fires were up significantly. The fires create a very real danger in the park, and sadly, many hikers had left behind a lot of celebratory trash (aka beer cans) on their way to Katahdin’s summit. This was a serious bummer to hear; most of the hikers I’ve encountered are devoted to the ‘leave-no-trace’ motto. But, I was sure Wendy was reporting the truth, and I assured her I’d be following all the Baxter rules. Because I was hiking over 100 miles, I would be considered a thru hiker and allowed to stay at The Birches, assuming there was space.

My goal, I told her, was to make it through the 100 Miles in six days. On the seventh day I planned to hike the 15 miles from Abol Bridge at the end of the 100 Miles to The Birches. I would hike Katahdin via the Hunt Trail (also the Appalachian Trail) to Baxter Peak and across the ridge to Hamlin Peak to complete my New England 67 on the eighth day.

Or so I thought.

As the go-date got closer, I started to worry about staying at The Birches. Wendy had shared that the campsite was often filling by early morning. It’s a first come system, so when hikers arrive at Abol, they sign up to stay at The Birches that night, then hike the fifteen miles to reach the campground. If the clipboard is full, you’re out of luck. In that case, you hang at Abol for a day or take your chances camping illegally inside Baxter State Park. And I wouldn’t risk it, especially after speaking with Wendy. Because it had become such a problem, rangers were starting to throw thru hikers out of the park for doing it.

I decided to make a reservation at Baxter’s Katahdin Stream Campground for the seventh night of my hike. The campground is on the AT, so I would be able to easily hop on Hunt Trail on the morning of day eight. Luckily there was an available space, probably because it was a Tuesday after Labor Day, as opposed to a weekend day before the official end of summer weekend.

The next scheduling item on my list was a food drop. The Hundred Mile Wilderness is the longest stretch on the AT with no provisioning stops, meaning you have to pack in enough food for the duration. The Maine Appalachian Trail Club advises hikers to bring ten days worth of food. I was planning to bring seven. Six I would consume with a seventh for back up. That is A LOT of weight.

My buddy Ben — aka my hiking coach — recommended I contact Phil Pepin at 100 Mile Wilderness Adventures & Outfitters. According to Phil’s Facebook page, his company has been a “full service provider offering shuttles, accommodations and resupply needs for hikers since 1977.”

Phil is a legend.

He’s hiked the 100 countless times. It’s nearly impossible to guess his age (60s?), and I’d been told he has legs like tree trunks. He knows every possible way in (and more importantly, OUT) of the 100 Miles via logging roads, snowmobile trails, and cart paths. If I got into trouble, Phil was the man I wanted to call.

So, I emailed him and asked him if I could schedule a food drop at the 50 mile mark. That meant I would stop at his camp in Monson before I started hiking to drop off half my food in a plastic bag. He would then drive it to his bear box in the woods on the side of the Jo-Mary Road, a dirt logging road deep in the wilderness, where I could pick it up on day four.

His reasoning was that he only offered resupply for hikers using his other services. I understood that to mean people using him for transportation and lodging. Many people who come to hike the 100 are flying into Bangor and need a pick up and a place to camp before starting the trail. Phil does all that and more, but I didn’t need those services.

The other option I had was to have Shaw’s Hiker Hostel in Monson bring in my resupply. The problem with that option was that I’d have to meet their resupplier not just on a specific day, but at a specific time. That felt incredibly stressful. What if I got held up? Would they leave with my food and then I’d have no supplies for three days? Or I’d have to contact them using my Garmin and wait for them to come back? There were too many variables. At least with Phil, as long as I made it to the drop box after he’d been there, I’d have my stuff.

I wrote back to Phil and explained that because I lived in Maine I didn’t need transportation or lodging. I offered to pay for a night at his camp, even if I didn’t use it, in order to access the food drop.

It became clear in his follow up response that he thought I was a thru hiker, not a section hiker. He explained that, unfortunately, he’d had some bad experiences with thru hikers in the past and had made the decision to focus his business on folks coming to Maine specifically for the 100 Mile trek.

Now we were on the same page, and he was happy to help me out. The food drop cost $50, and with that came a customized map and, most importantly, access to Phil and all his knowledge if I got in trouble during my hike. His website has a plethora of incredibly useful information and tips, and his Facebook page is updated regularly with 100 Mile news and conditions.

This gave my family (and me, but mostly my family), massive peace of mind.

Once I knew I only had to carry half my food at a time, I went about figuring out exactly what that food was going to be.

Here’s what I ate every day:

I’d planned to take my 3-liter hydropack, but Ben reminded me water is abundant in the 100 Miles (except it wasn’t always – more on that later). I ended up taking a 1.5L bladder and a Sawyer Squeeze, which is a filter that screws onto the top of a basic plastic water bottle. It’s much faster than manually filtering water into a bladder. Sink the bottle in a stream, fill it, screw on the filter, drink. Easy-peasy.

Now the question was: Would it all fit in my pack?

Shockingly, it did, and without much effort. That was a huge relief and made me feel like I was bringing the correct amount of stuff. With all my gear, clothes, and half the food, my pack weighed about 28 pounds (without water).

I’d spoken to the folks at Baxter about my pick up. Normally, hiking Katahdin requires a parking reservation at the trailhead. However, if you’re entering the park after 2pm to pick up a hiker, you don’t need to make a reservation. My family would be tracking my progress via the Garmin website as my In-Reach sent out points, and we would be able to text using the device so I could tell them when I’d be finishing.

It seemed unbelievable, but after months of planning and training, all the pieces were in place.

The only thing left to do was drive to Monson and start walking. 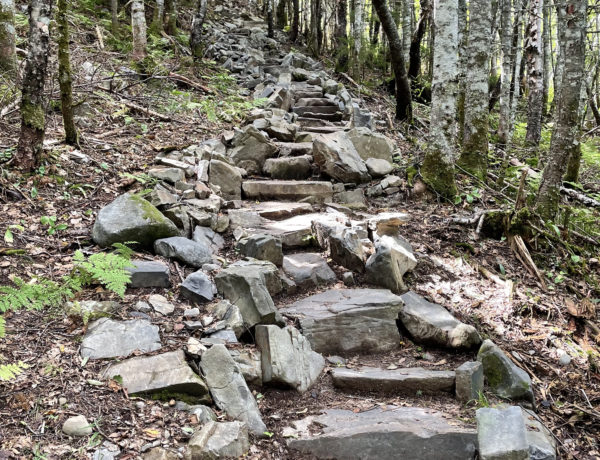 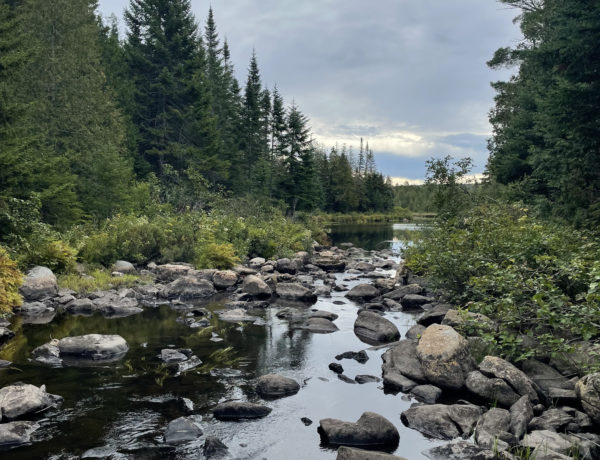 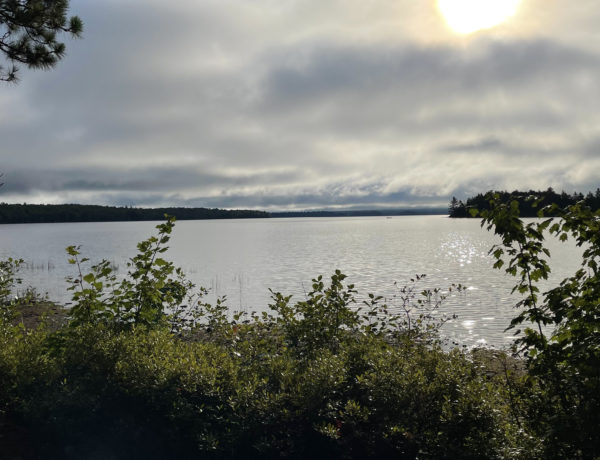